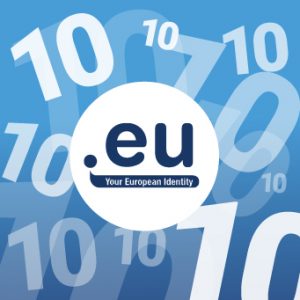 .eu is a popular extension for companies, organziations and associations within the European Union. This domain is only available for registration for EU citizens and companies headquartered in the EU. It is a relatively new ccTLD. The registry for this domain name opened only in 2006. As a newer and somewhat less popular ccTLD, .eu is a very suitable option for an European businesss, and a good choice to emphasize your European identity. You can also use it as a short and recognizable extension when .com or local ccTLDs are already taken.

The European Union is also a large user of .eu domains. They use the third-level domain .europa.eu for all of the European government’s official websites. Other users of the .eu domain include some Basque webpages, as .eu corresponds to the initial letters of Euskadi, the name of the Basque Country in its own language. However, these days, the Basque Country also has its own ccTLD in the form of .eus. Some Romanian, Portuguese and Galician website owners have also gotten creative with .eu, as “eu” means “I” in these languages.

Get an .eu domain today for just €10 with this magic numbers promotion! You’ve got just 10 days!