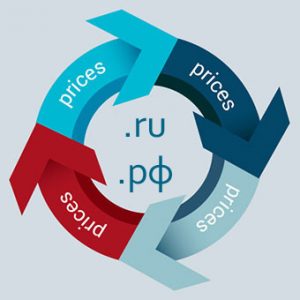 The Russian registry ccTLD.ru has announced a price increase for their .ru domain extension and its Cyrillic counterpart .рф. As from the 1st of July 2017, the new price for our Members will be RUB 141.60. The price for non-Members will increase with RUB 60.00. The new price will apply to new registrations, renewals and transfers.

The Russian registry has been mentioning  the need to raise the prices for the .рф and .ru domain extension since 2012. The current price has not changed since 2007. The registry has sent out a survey which showed that no serious decrease in the number of registered domains is to be expected.

If you are not familiar with the Cyrillic alphabet, you may not have seen a .рф domain before. It is only possible to register a .рф domain with a Cyrillic domain name. Besides this one, there are many other domain extensions available in non-latin scripts and alphabet. These include domains in Arabic, Bengali, Chinese, Greek, Hebrew and Thai script. Domains that include diacritics, such as á, ö or ç, commonly used across Romance languages, are also in existence.

Out of all of these non-latin domains, the Cyrillic .рф is one of the most popular ones, with over 700000 registrations in 2020. In the past years, however, its global popularity in relation to other internationalized domains was overtaken by China, where over 3 million of such domain names are registered!