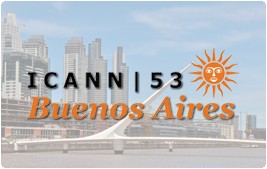 At the end of June, the Sheraton hotel and congress centre in Buenos Aires was the stage of the 53rd ICANN meeting. These thrice-a-year meetings are the perfect opportunity to learn what’s going on at the highest level of internet governance (and to get involved in that matter), to meet all kinds of registries and other suppliers and to get in touch with our customers worldwide.

ICANN meetings move across the five continents over the years. Although there is a group of people that you’ll see everywhere (including Openprovider), one of the inspiring elements is the local attraction. In Buenos Aires I met many customers from Latin-American countries, that I would not have met in other parts of the world.

Another example is the LACTLD forum. LACTLD is the Latin-American and Caribbean TLD Association, comparable with the European CENTR. LACTLD hosted a couple of sessions throughout the week, starting with a full day of workshops. 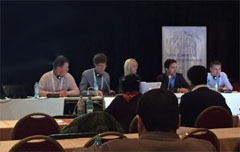 The afternoon sessions of these workshops were related to the registry-registrar relation. Many Latin-American registries do not yet have a registrar-based business model, but some of them are thinking about it. To gather input from the registrar field, I represented Openprovider in a panel discussion called “What makes a ccTLD attractive to a registrar”. The key outcomes were simplicity in technique and administration, standardization and automation of procedures and recognition of the reseller model.

Later in the week there was a session called LAC Strategy Update. Not only “registrars” are a new topic for many of the Latin-American registries, also technical developments are not put on top of the agendas: DNSSEC, IPv6, EPP, … – if it ain’t broken, don’t fix it seems to be the creed. ECOM-LAC, a region-wide organization stimulating internet and e-commerce, is organizing workshops on these topics.

Talking about strategy: the most concrete changes in Latin-America come from the biggest countries. Argentina recently decided not to give away domains for free anymore and saw an increase of availability together with a decrease of abused domain names. Whether or not to accept registrars is a second question, for now it’s the famous Spanish saying “maybe mañana mañana”. Chile, on the other hand, the country with the highest domain density of the region, is finishing its registrar model at the moment of writing. Before the end of the year, we expect to be able to connect to the registry directly.

Will the topic of New gTLDs ever come to an end? Probably not in the next couple of years. But although still very relevant, it’s no longer the main topic at the ICANN meetings.

The New gTLD Program Reviews session provided insight in the ongoing efforts to analyze the past years. Which lessons is ICANN learning to improve a next round of new gTLDs? The first study, already finished, is that on consumer awareness and trust. Other studies currently going on are the economic study that focuses on price elasticity and effect on the existing hosting business. Another important study is that on rights protection mechanisms: what is the best way to ensure the new extensions do not threaten brand and trademark holders? Together with around 10 other studies and surveys, it will deliver a framework for any next round.

Then there is another topic that causes a bit of rumour: ICANN has gained huge amounts of money from the last-resort auctions, currently counting over 50 million dollars. This money is dedicated to the new gTLD program, but ICANN has no idea what to do with it. ICANN hosted a Workshop on New gTLD Auction Proceeds to get input from the different stakeholders. Registries with experience are for example SIDN (.nl), Nominet (.uk) and CIRA (.ca).

There is also a technical challenge around the new gTLDs: not all parts of the internet infrastructure, from hardware (routers, firewalls, …) to applications (e-mail clients, web forms), appear to accept them yet. The Universal Acceptance Steering Group was formed to investigate and solve this problem, and they had two sessions: a workshop and a general update. More about this universal acceptance and Openprovider’s role in it follows in a next blog post.

A hot topic since the introduction of the new ICANN contract in 2013 is the “Whois Accuracy Specification” in which the registrar validates and verifies the data of the domain holder. Part of this specification is the contact verification that you are all aware of and which results in the worst case in suspension of a domain name.

The specification was included in the contract upon pressure of the public safety community, formerly know as law enforcement community. Their goal? A verified point of contact for easier communication in case of issues. The Registrars and Law Enforcement session was a good moment to hear both sides of the story.

So far, no cases are known in which verification or validation actually helped. As from registrar’s perspective the requirements are out of proportion, we are trying to soften these requirements in a collective effort by the registrar community. A couple of proposals have been listed and are currently under review. This includes:

While the report is still under review, the responses from the public safety representatives that were present were pretty defensive: “hundreds of thousands of suspended domains is just a small fraction of all domains registered globally” and “registrars dealing with resellers just need to tie down their resellers on the short response time requirements”.

From the registrar perspective, we keep putting pressure on relaxation of the rules. In the end, there are not only big registrars but also registrars with a couple of thousands of domains and one or two employees. The current rules are a big hurdle in their registrar business. To be continued!

Of course, this is just a small selection from all talks and sessions throughout a completely crowded week. The most inspiring meetings are always the unexpected ones – opening your eyes for new opportunities, opening doors for potential partners, customers or both.

The next ICANN meeting will be in Dublin (Ireland) from the 18th to the 22nd of October. As for its proximity to many of our customers, those wanting to smell a bit of the characteristic atmosphere at ICANN meetings get a perfect opportunity there! It is possible just to drop by for one or two days. Register via ICANN’s website!