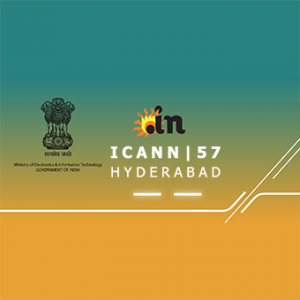 Last month, the Hyderabad International Convention Centre in India was the stage of the 57th ICANN meeting. These thrice-a-year meetings are the perfect opportunity to learn what’s going on at the highest level of internet governance (and to get involved in that matter), to meet all kinds of registries and other suppliers and to get in touch with our customers worldwide.

ICANN meetings move across the five continents over the years. Although there is a group of people that you’ll see everywhere (including Openprovider), one of the inspiring elements is the local attraction. Together with our Indian country manager Aastha, I’ve met a variety of Indian suppliers and potential customers, ranging from a small to many-million domain companies.

This ICANN meeting, taking place in a city also known as Cyberabad, was the biggest ICANN meeting ever: ICANN counted almost 3.200 checked-in participants from 130 countries, 1.300 of them from India. If you love numbers: check this infographic.

In the traditional opening ceremony, the digital growth of India and full adoption of new standards in India were addressed. Did you know India currently has 15 IDN ccTLDs assigned? That is more than any other country in the world. As K.T. Rama Rao, the Telangana minister of information technology stated: “No other single tool in human history can said to have had as much impact and aided as much progress to humanity as that of the internet.”

Of course, the most important recent development – the IANA transition – was hot topic as well. In short: IANA, the organisation governing all extensions, IP addresses and protocol parameters, was for historical reasons contracted by the US government’s NTIA. Now it’s governed by the global internet community, making it no longer dependent of one single country.

After a ceremony full of Trump jokes (nobody could have predicted the outcome of the elections at that time…) and concluded by an Indian dance performance, the real ICANN meeting was about to start.

I doubt whether there will ever be an ICANN meeting without new gTLDs on the agenda. Also this nineth ICANN meeting after the first new gTLD saw its Sunrise included various new gTLD sessions. Because in my perception every session on a next round contains the same timeline, but shifted towards the future, I skipped that session and instead went to see what other stakeholders think about it.

Governments (a very important stakeholder at ICANN) are arguing about whether or not to maintain protection of IGO (inter-governmental organization) names like the “Red Cross” and whether or not to extend the protection of geographical names. This latter question was addressed at other meetings as well: do we want to block all geographical names, worldwide, in all extensions? Knowing that “geographical names” is not only defined as country and city names, but also names of villages, neighbourhoods, rivers, mountains, vaguely-described areas, … I am really afraid what will happen if the most restrictive proposals will be accepted. Maybe you remember the cases of .amazon (the famous jungle, but also the famous online retailer), .tata (Indian multinational conglomerate holding company, but also a tiny region in Morocco) and .bar (a short generic, but also a region in Montenegro). If all governments can add any geographical name in any local spelling variant to a list that must be blocked by all extensions, innovation will abruptly die. Keywords used during those discussions include “common sense” and “public interest”.

In another session one of the early adopters reminded ICANN about its original intent in 2007 to have a continuous process of adding new extensions to the root zone, so the 2012 round cannot be said to be the last and final round. The question is how this continuation will look like. Round-based as it has been until now? Or a continuous process? If I have to predict the future, I would say that there will be one or two additional massive rounds, after which it becomes free to anyone to apply for an extension at anytime, of course building in some comment period in which other stakeholders have the possibility to file objections. An important issue, whatever the future will look like, is the participation of underserved regions. ICANN will review if it can increase awareness and what it can do with the price for an application.

As you hopefully are all aware, ICANN has recently changed its transfer policy, which now includes changes to ownership as well (in Openprovider, those owner changes are known as “trades”). Part of the Registrar Stakeholder Group day (of which Openprovider is a member) was dedicated to those changes. A serious argument with ICANN is how registrars should deal with whois privacy: according to the policy and the ICANN contract, enabling or disabling whois privacy is not considered a trade, but the ICANN Compliance team continues stating that it is considered a trade. We have decided together with the registries (they see this as a problem as well) that we will file a proposal to move this single point of discussion into another current project: the Privacy/Proxy Services Accreditation project.

This is just one example where interpretation of ICANN Compliance does not match the registrar’s or registry’s interpretation of contract and policies. Most of those mismatches are revealed only when registrars actually start implementing new policies. We’ve agreed to involve ICANN at an earlier stage if we foresee such problems.

As said, privacy/proxy services is another policy issue at ICANN. While there is a working group, well, working on it, the original intent to have a new policy in place on the 1st of January 2017 is no longer possible. The registrars will send ICANN a proposal to extend the current interim policy, meaning that we will not face any changes soon.

One of the clauses in our contract with ICANN requires us to validate addresses up to an extreme level (is the city in the country? does the house number exists?), luckily ICANN understood that this is not commercially feasible. For that reason, this part is not enforced until a good solution is available. ICANN has done some preparation and selected a couple of potential third party providers that could do this validation. However, the many resellers that participated in this session cracked these proposals down as being “not commercially feasible”. This isn’t surprising, if you read amounts like $500.000 setup or $4 per validated address. If even ICANN cannot find third parties that can do this validation for a reasonable amount, how are we, registrars, supposed to do so (or implement it ourselves)?

We have clearly informed ICANN that “commercially feasible” does not only involve the per-address validation costs, but also resources for implementation, communication and additional support questions.

It might even be that abuse will increase because of such a policy, completely contrary to the goal of ICANN. Our current abuse monitoring scripts check for example some weird combinations: if a customer lives in Paris, Germany, our domain is flagged. If all addresses are syntactically 100% correct, this check will never trigger anymore.

After seven days of sessions, meetings, events and appointments, ICANN 57 concluded for me with the Public Forum – a session in which anyone can state anything directly to the ICANN board. The most striking was an almost-argument between Afilias and Verisign about whether or not the assignment of .web was fair play (for those interested: read more).

Heading home – and being trapped at Hyderabad Airport, listening to “Eternal Flame” for 3 hours (seriously, no single other song, just Eternal Flame. Why???) – it was time again to follow up the dozens of meetings I had. Time to look ahead to the next ICANN meeting, 11-16 March in Copenhagen, Denmark!